What Lies Ahead; Predictions for the next 10 years (Written in January 2020)

By Ian Unsworth - August 01, 2020
*This was originally written in January, but I never published it because it wasn't complete, and felt a  bit lack-luster. I never went back to revisit it, but since there have been some notable events concerning tik-tok, etc, I decided to publish it in its raw form. I apologize for the beginning, just scroll down for better content, and thanks for reading/visiting*

As this new decade slowly emerges, I can't help but ponder about what these next ten years could possibly bring. Over the past 10 years, we've witnessed the emergence of some incredible new trends and technological advancements. A few brand names that come to mind that didn't exist at the beginning of 2010 such as Uber, Lyft, Airbnb, Instagram, and Amazon's Alexa all now seem cemented into our society. These all shifted the way we think about certain things, from the rise of the gig economy to Instagram's morph of social media to a visual experience to Alexa becoming a household name as a virtual assistant. All of these names are American companies that solve problems in our western culture, but my prediction is that this coming decade will bring widespread adoption from other parts of the world to America rather than the other way around.

After two world wars and a fair amount of global intervention, America has long been positioned as a global leader. Being deeply intertwined in global affairs produces a byproduct of far-reaching cultural influence. American music, film, and literature (arguably shared with the UK) have flooded the world, along with other cultural mediums. Of the top ten highest-grossing films of all time (adjusted for inflation) 9 are American made, grossing a total of $25.6 billion. As for music artists, there are only 8 artists that have sold more than 250 million or more records, 3 of those are artists are American When looking at vocabulary and spelling of English words, books, and tweets, American English is more common in communities in the European Union when compared to British English. Not only did mediums like television, radio, and print help expand America's cultural influence, but so did the unparalleled trade global trade dominance America held for the past four decades, see data visualized below. However, I think American cultural influence, also known as "Americanization" has peaked. 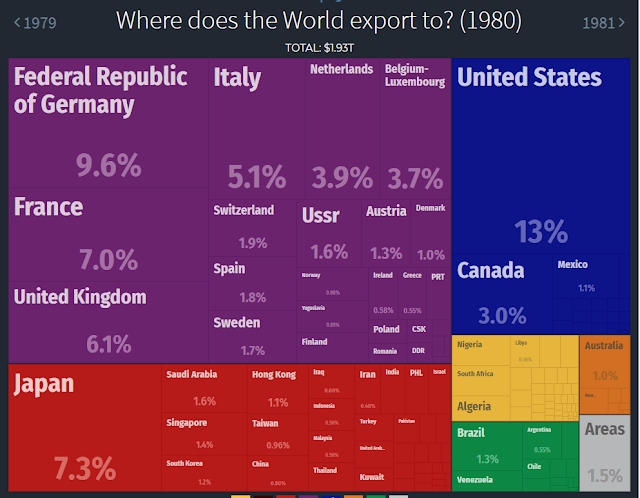 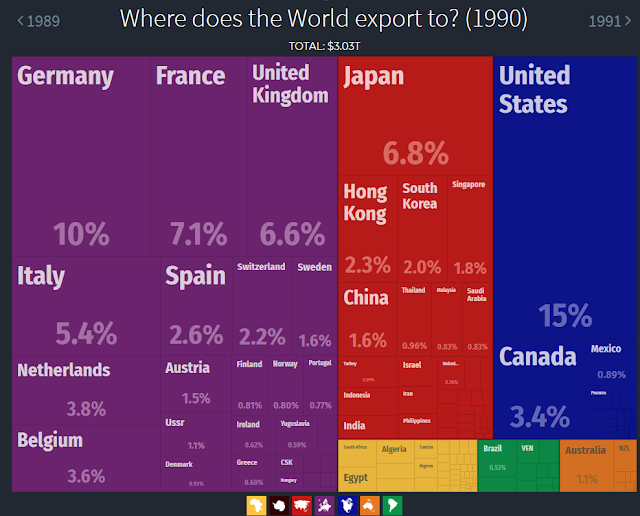 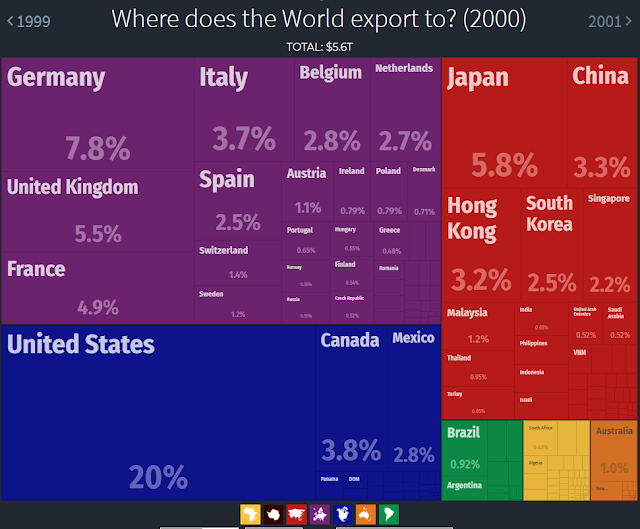 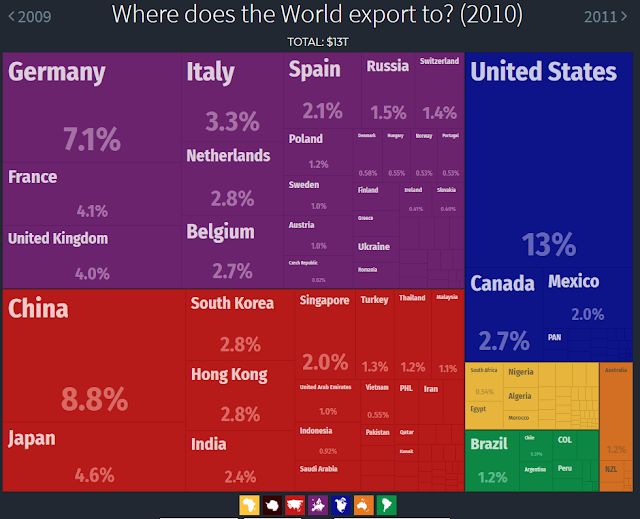 Traditional mediums that could provide cultural influence all came down to one thing, capital. If you were a filmmaker without a studio backing you, then your films were likely only seen by a small fraction of people. If you were a music artist without a record label, then your music likely had a very mediocre reach. If you were an author without a publisher, well good luck. The trend was clear, capital x creativity = audience reached. Take one factor out of that equation and see how it works.

The internet has leveled the playing field for creative producers in film, music, literature, etc. Your potential audience is any one of the 4.5 billion people who are active internet users. Capital helps in the reach but is no longer essential. There are countless creatives who have successfully monetized their abilities thanks to the internet as an underlying tool. This means everyone is now capable of being their own producer of anything. Things are popularized based on group consensus, the way it has gone for many centuries, but now it happens much quicker since half the globe is connected digitally. Viral videos are a perfect example of this rapid popularization trend. There are 2.5 quintillion bytes of data are created each day, 300 million photos are uploaded every day to facebook, Instagram users post over 47,000 photos every minute of the day. With more non-American people becoming users on popular platforms like Facebook, Youtube, and Instagram it will be interesting to see how influence is spread.

With the world becoming more digitally connected by the minute, I predict this next decade will show the internet begin to divide into two very different monsters. One side will be censored, controlled, and heavily limited, while the other will be free and untethered, it's hard to imagine which will become more chaotic. China alone has 829 million internet users, that is more than twice the population of the United States. India has 560 million internet users, more than the population of the United States and Brazil combined. As many people know, China has a tightly censored internet along with pervasive surveillance of communications, thus keeping tight control of information. The United States and India contradict that rhetoric with a much more free and open internet where information flows freely. With Chinese influence increasing economically and culturally through the BRI, I predict countries will follow suit with the Chinese version of the internet, whereas other democratic countries such as the United States and India will continue to naturally expand their digital influence.

The American internet has much more of a legacy to it, dating back to when it was just used among a handful of academics to its now enormous reach. The concept of an open internet has of course been challenged with a handful of dilemmas such as privacy concerns, misinformation campaigns, and numerous other exploitations. However, the pros heavily outweigh the cons and open internet has been a net positive for society. By providing unprecedented connectivity, communication, information, knowledge, learning tools, and opportunities for commerce to evolve, open internet has helped evolve society tremendously fast. Even though an open internet is harder to regulate, it will still allow for a more open society which is heavily reliant on open, accessible and validated information.

This type of internet is not only favorable but is heavily correlated with liberal democratical run countries. India, as the largest democratic country in the world, will play a pivotal role in how this version of the internet will evolve. India has over 560 million active internet users with more coming online every day. India leads the world with the cheapest average cost of mobile internet, costing only $0.26 vs the United State's $12.37 per GB. You are already seeing the influence of Indian internet users abroad. The best example of their influence comes from YouTube, the second most popular social media platform with just over 2 billion active users, where the most subscribed to channel is T-Series, a music and entertainment conglomerate boasting over 90 billion views. As more Indians become internet users, it's likely we see a trend in content creators leveraging American platforms such as YouTube, Twitter, Facebook, etc. How exactly their influence on these massive platforms will influence other countries is unknown, but it will be exciting to see how that spreads and evolves. 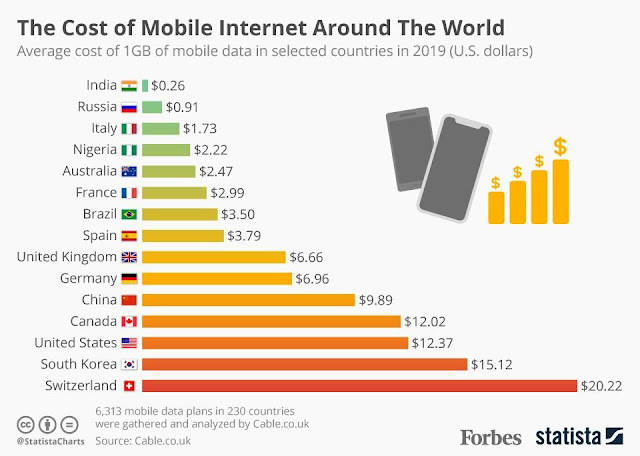 Despite China's undesirable internet rhetoric, they've got an impressive and expansive digital ecosystem. Of the 16 most used social media platforms ranked by active users, 6 of them are Chinese, the rest are American. Of those 6 platforms, they comprise 3.8 billion users, likely there is a lot of overlap, but regardless that is a mind-boggling figure. WeChat, a Chinese multi-purpose messaging, social media and mobile payment app developed by Tencent have 1.133 billion active users alone. China only has just over 830 million internet users, so that means roughly 300 million people use WeChat who arent in China. Those people could be Chinese ex-pats, relatives of Chinese people living abroad, bots, etc. Through China's Belt and Road Initiative of expanding geopolitical influence in 152 different countries, it is likely that Chinse tech platforms will spread to these places where investment and development are taking place, further increasing China's digital ecosystem beyond the borders of their country. 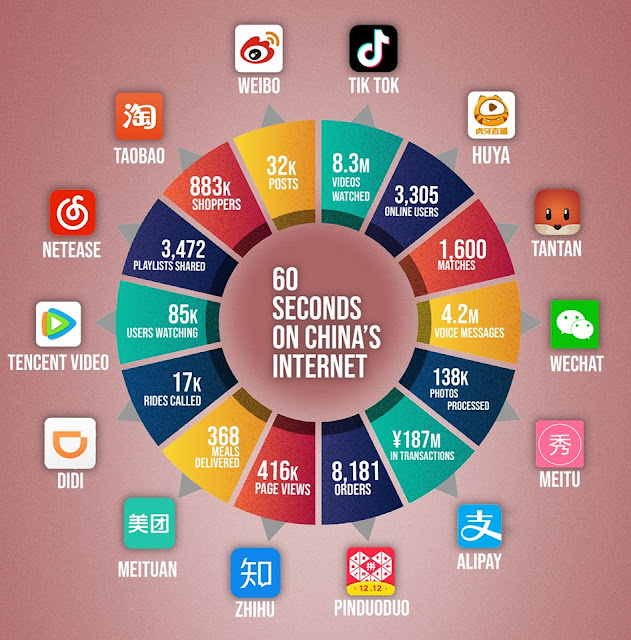 What do you get when you relentlessly spend over $1 billion on advertising across the largest social media platforms available? Answer: 500 million users in only 3 years, a threat to national security, and social media addiction. Tik Tok, a Chinese video-sharing app has taken the United States by storm. TikTok has fully penetrated the US market, and even if you haven't downloaded it, you've surely heard of it. TikTok makes 42% of its revenue from the United States mainly through in-app purchases of "coins" which are gifted to the user's favorite creators. TikTok is owned by parent company ByteDance, an unprofitable Chinese tech conglomerate valued at $75 billion, with a looming IPO in the foreseeable future. With 60% of American TikTok users falling between the age of 16 - 2, it is unlikely they care about Chinese ownership and the implications that arise with that, especially given the app is entertainment-based.

No other social media platform shares the same clout TikTok carries with it in the United States.
With the recent troubles, Facebook found itself entangled in, people were able to attempt to hold Mark Zuckerberg, and his American company accountable. Being an American himself, Zuckerberg is a stakeholder in this country's society and frighteningly, also a leader in data privacy based solely on how many people his platforms of Facebook, WhatsApp, and Instagram collectively host. When Facebook faced privacy issues, law holders held him accountable and subpoenaed him where he answered questions in front of some clearly uninformed senators and congresspeople. If and when privacy concerns arise over TikTok, what will happen? It is unlikely any official from the company would appear in front of our elected representatives.

TikTok is currently being examined by the Committee on Foreign Investment in the United States regarding their growing influence and concerns of evidence that the app has been sending data to China. Given the young demographic of TikTok users, it provides China a clear opportunity to tweak content algorithms to promote or suppress the content of their choice, influencing the thoughts, feelings, and emotions of America's future. Content promoting Taiwanese or Tibetan independence, support of the Hong-Kong protests or the discernment of their imprisonment of over 1 million Uyghur Muslims, is all removed by content moderators without question.

My prediction is that within this decade we will see the sale of TikTok away from ByteDance to a non-chinses entity if it wants to continue to operate in the United States. As these two different versions of the internet evolve, I believe you will see similar trends continue if businesses want to operate in either country. I do not see a middle ground between Chinese censorship and America's free and open interpretation. If Google wants to operate in China, then they will have to play by their rules, similar to how Apple currently operates.


This coming decade holds many challenges for digital evolution at both a macro and micro scale. There will be many thought-provoking discussions about this topic and censorship will ultimately define whether these next 10 year will be full of free-flowing ideas, open innovation, and prosperity as we move to face the challenges humanity has presented to us, or if we will become more connected only to know less.

TikTok as a Case Study

[what do you get when you spend x on advertising]